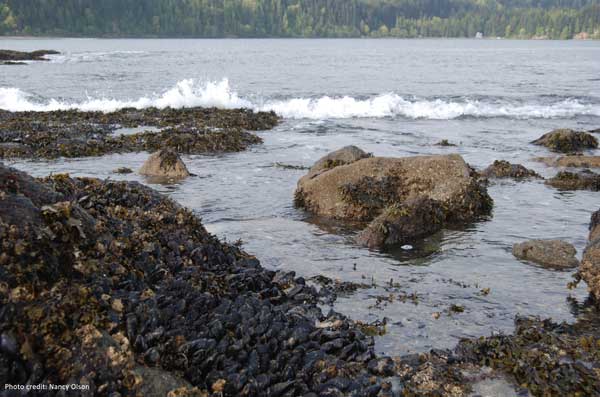 The Blue Mussel is found almost everywhere there's saltwater and something to attach to. It's a two-shelled creature, or "bivalve," wedge-shaped, usually blue or purple and up to several inches long. In calm water it grows in dense clumps on docks, pilings, and rocks.

Like other bivalves, the mussel can move on its single foot. But usually the Blue Mussel stays put and holds itself in place in an amazing way. Near its foot, the mussel has a gland that secretes a liquid. When it finds a rock or other hard surface, the mussel uses its foot to draw some of the liquid down to that spot. The liquid quickly hardens under water, leaving a strong and slightly flexible thread. Then the mussel makes another attachment and another until it's held in place with a bunch of little guy lines.

If sediment is about to bury the mussel, it breaks these lines, glues a new thread further away, and pulls itself forward with the new line.

To feed, mussels draw in water between their shells and filter out tiny plants and animals. Blue Mussels process 3 quarts of water an hour doing this. When the tide drops, mussels survive out of water by shutting tight. Those attached lower in the water are easier prey for predators like the Purple Sea Star, which pries them open, and snails like the Dogwinkle, which drill into them and liquefy their insides.

Living in tense clumps, Mussels provide habitat for many smaller creatures that shelter beneath them. When you're checking out these abundant creatures at the beach, please avoid stepping on them or trying to detach them.