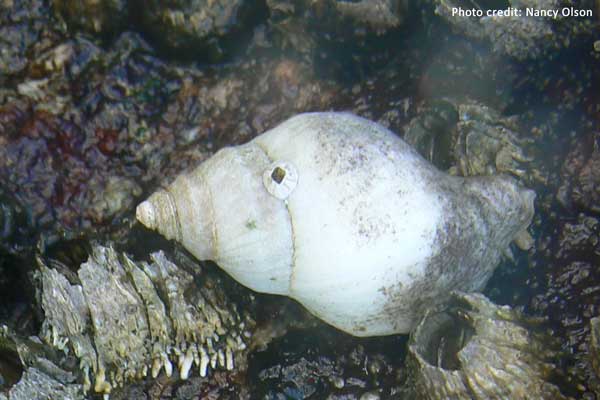 This predatory carnivorous snail eats almost anything, including its own egg-capsules. The Dogwinkle's main foods are acorn barnacles and mussels. It attacks its prey by scraping the shell with its radula, a specialized tongue lined with little teeth. Then the Dogwinkle uses its radula to drill a hole, releasing enzymes to soften its victim's shell, and finally it rasps the exposed flesh with its tongue.

The California mussel is not defenseless against this snail. The mussel makes a strong thread and attaches the snail to a rock. Unable to move, the snail starves.

The Dogwinkle prefers rocky habitat. In winter, large congregations of these snails come together to breed. Each female lays up to 1,000 eggs each year. At low tide you can see the clumps of yellow egg-capsules, called "sea oats," attached to the underside of rocks. The first snails to hatch eat the others.

These heavy-shelled, 3 inch snails vary a lot in shape and color. They can be frilled or smooth, white, gray, orange, yellow, brown, purple, or banded. Another common name for the Dogwinkle is the Winkled Purple. In Roman times this snail's shell was a source of purple dye for expensive clothing.

The Dogwinkle's major predators are the Mottled and Purple Sea Stars and the Red Rock Crab. The snail senses seawater that has passed over predatory crabs and moves away to escape.

Beachcombers enjoy collecting colorful shells, but even empty ones provide homes for hermit crabs and other animals. So instead, collect photographs of them and leave the shells in their marine environment to be used again.