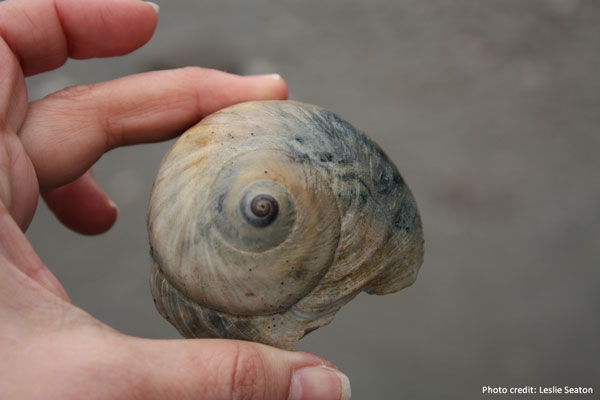 A tiny round hole in an empty clam shell is a good clue the moon snail has dined. The moon snail's brown or buff-colored spiral shell, the biggest you'll find on Puget Sound beaches, can grow to 5 inches. Protruding from that shell, the snail has a huge fleshy foot on which it plows through the sand after prey.

When the moon snail senses food is near, its giant slimy foot envelops the clam or other bivalve. The snail then starts drilling into its victim's hard shell with a sharp kind of tooth called a "radula." Progress is slow, so to speed things up, the snail squirts a few drops of hydrochloric acid and enzymes to dissolve the shell and then liquefy the victim's innards. Drilling might take a few days, and the snail spends another absorbing the clam slurry inside.

Disturb a moon snail, and it will pull its big foot into its much smaller shell and clamp closed a shiny brown door called an "operculum." Moon snails have their own predators too: the sunflower star, octopuses, rock crabs, gulls, even other moon snails. Surviving these threats, a moon snail may live 14 or more years.

When it's time to reproduce in spring and summer, the female moon snail mixes more than a million tiny eggs with sand to form a leathery round collar. You may see these collars washed up on the beach waiting to break apart and develop new moon snails. Help preserve this interesting creature by tossing its egg cases back into the water.