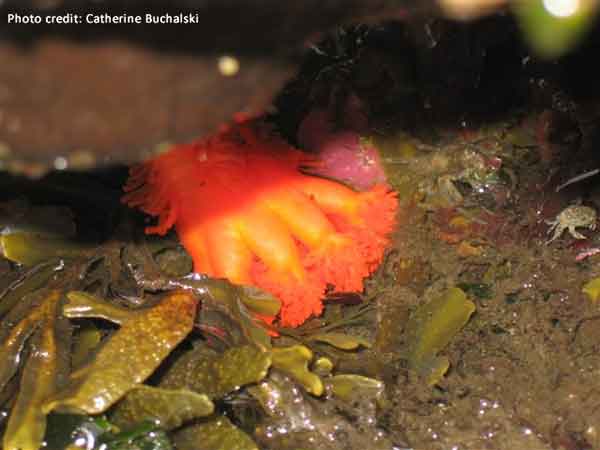 Meet the amazing Orange Sea Cucumber. At first it's hard to believe that this orange blob, seen under rocks at low tide, could be amazing. The orange sea cucumber is related to sea stars but much more resembles a cucumber than any star. It's long and tapered at both ends and has spines or bumps all over.

Instead of arms for feeding like the sea star, the cucumber has tentacles. Once a tentacle is saturated with food, it's inserted into the creature's mouth, licked clean, then slowly extended back into the water.

The cucumber's skin is another of its amazing features. Made of a material called "catch collagen," the skin can change from solid to liquid and back again. The cucumber uses this feature to fit and live in crevices beneath boulders and rocks. Like the sea star the cucumber has tube feet for holding onto its home's walls. If removed from its habitat, the cucumber expels all its water, shrinking into a small, hard rock of a creature.

This animal prefers living in strong currents, where hunting is harder for its predators. When one does disturb the cucumber, it uses another amazing trick: spewing out all its guts, intestines, respiratory organs, and more. This sticky mess may entangle or distract or be a meal for the predator. While its enemy is occupied, the cucumber escapes and re-grows its organs. Cucumbers can live 5 to 10 years if they successfully avoid their main predators — sea stars, fish and humans.

The cucumber's rocky shore habitat is fragile. Life here is at risk from coastal development and pollution, including waste oil and agricultural runoff. Avoid use of chemicals around your home, and shop for or grow organic food.