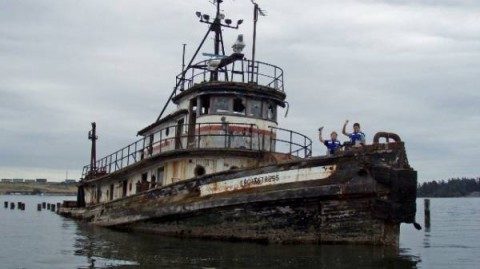 Do you remember the mighty 120-foot derelict tug, the Enchantress, that sunk in the mud off of the east end of 34th St in the early 2000s? Here is her lurid tale!

Rick Carnes, of Sedro Woolley, owned the Enchantress and several other tugs. Carnes appeared to be a fast talker and scammed a number of folks (some say everyone he met) – boat towing companies, skippers, engineers, dock owners, and at last, a boat buyer.

On the same day in June 2000, Carnes towed the Enchantress and brought the Ronnie S under her own power to Anacortes. The Enchantress was moored in Fidalgo Bay to the burnt pilings of the Custom Plywood Mill; the Ronnie S was tied to Curtis Wharf for a while, then moved to Shannon Point Seafood, owned by Samsung.Apparently the Ronnie S began taking on water pretty soon after mooring. Carnes made himself scarce in Anacortes; both tugs were essentially abandoned.

Carnes was part of an even bigger scam with another tug in Everett. He convinced Rick Taylor of Hamilton to sell his house and use part of the money to finance Carnes’ Everett tug. By September 2001, Carnes owed Taylor $60,000 and perhaps by that time, Taylor understood what kind of man Carnes was. On September7, 2001, Taylor shot Carnes dead outside his home. Taylor then killed himself in the woods near Day Creek. 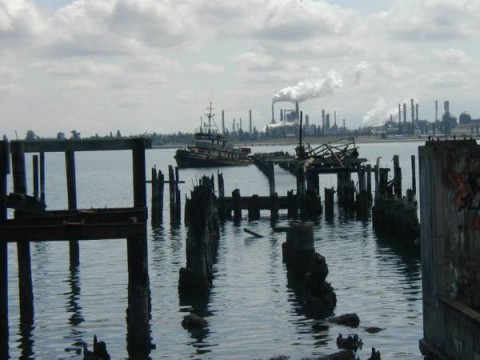 Now, consider what happens next:

Over the years, Anacortesians had come to love the Enchantress. Bill Mitchell, our wonderful town muralist, and many others wanted to keep her - whether that meant for her to stay put or move her elsewhere - and started a petition, looking for grants to address the associated high costs. Unfortunately, while the Enchantress was once a beautiful 1940s Miki-class US Army tug, she was used and altered during her long life (she was known as the Leslie Foss for many years) and therefore could not be considered for historic status. Other of her Miki sisters were at the time better preserved.

Preserving the Enchantress at the end of her life was too difficult and expensive, and she was removed before the start of the Baywide cleanup. However, if you want to see a small part of the Enchantress, look up in the loft of the Port’s Transit Shed. Her nameplate is still there. 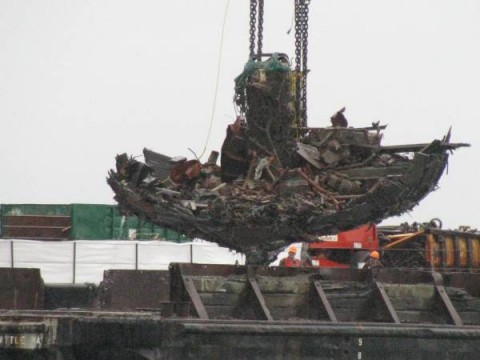