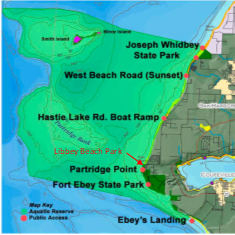 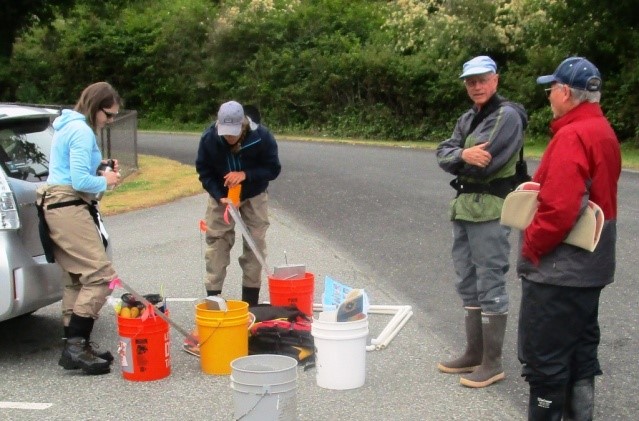 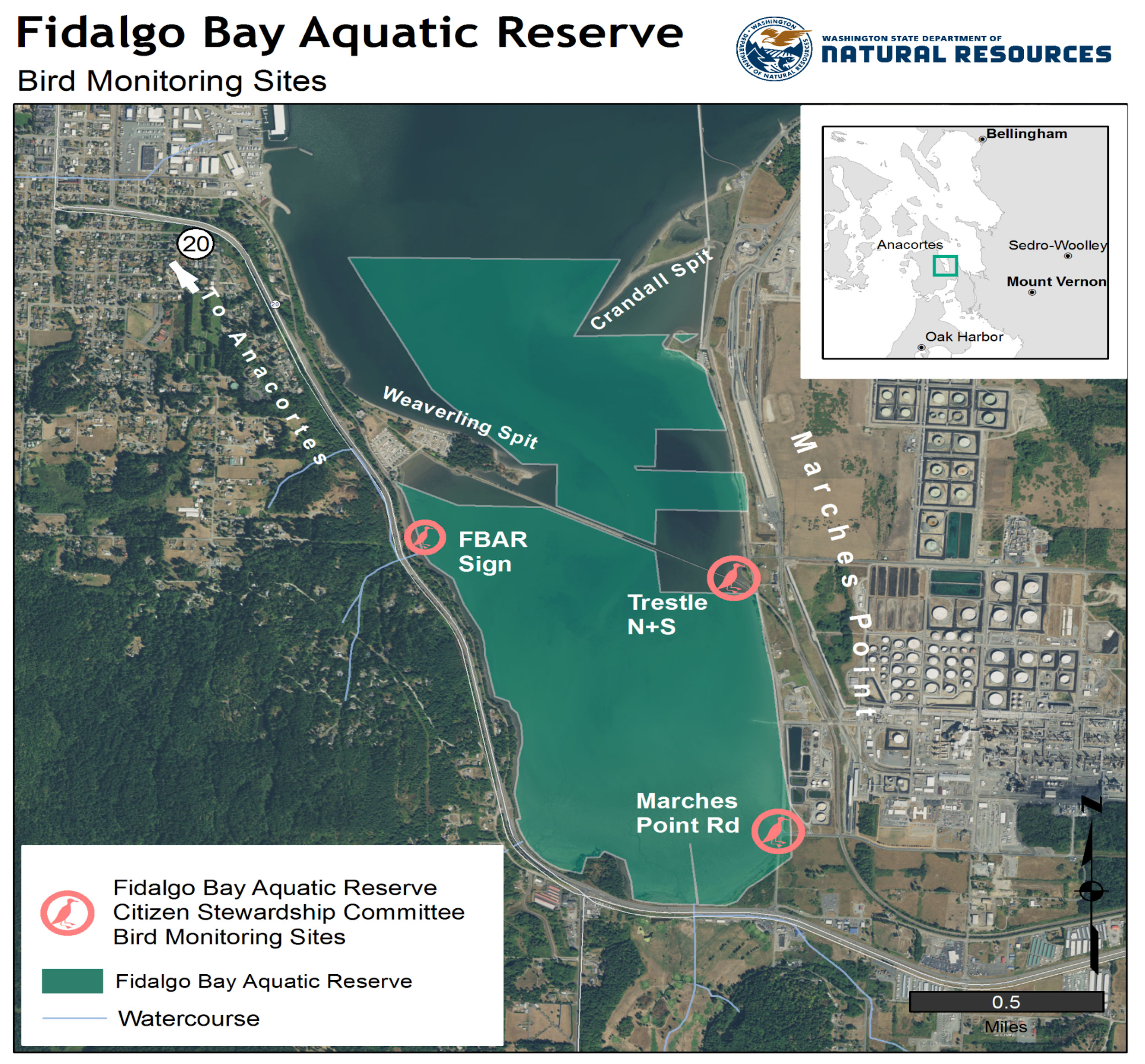 After many years of questioning what bird species use Fidalgo Bay Aquatic Reserve, the members of the Fidalgo Bay Citizen Stewardship Committee decided it was time to put this question to action. This question could not be answered previously because bird species have never been consistently surveyed within the aquatic reserve. There have been a few studies quantifying marine bird species abundance in the Salish Sea, the most comprehensive being the Marine Ecosystems Analysis Puget Sound Project conducted in 1978/1979 . The most recent survey of the bay to our knowledge was conducted by ornithologist John Bower of Western Washington University, “Changes in Marine Bird Abundance in the Salish Sea: 1975 to 2007”. Using these two reports as our guide, the committee got to work organizing surveys to quantify the diversity, distribution, and abundance of marine bird species within Fidalgo Bay Aquatic Reserve.

A key factor in the success of planning these surveys was the guidance we received from the Cherry Point Aquatic Reserve Citizen Stewardship Committee, who have been completing bird surveys up north for six years now in close partnership with the North Cascades Audubon Society. Lucky for us, the Skagit Audubon Society also has an incredible group of birders that were eager to help this project take off. 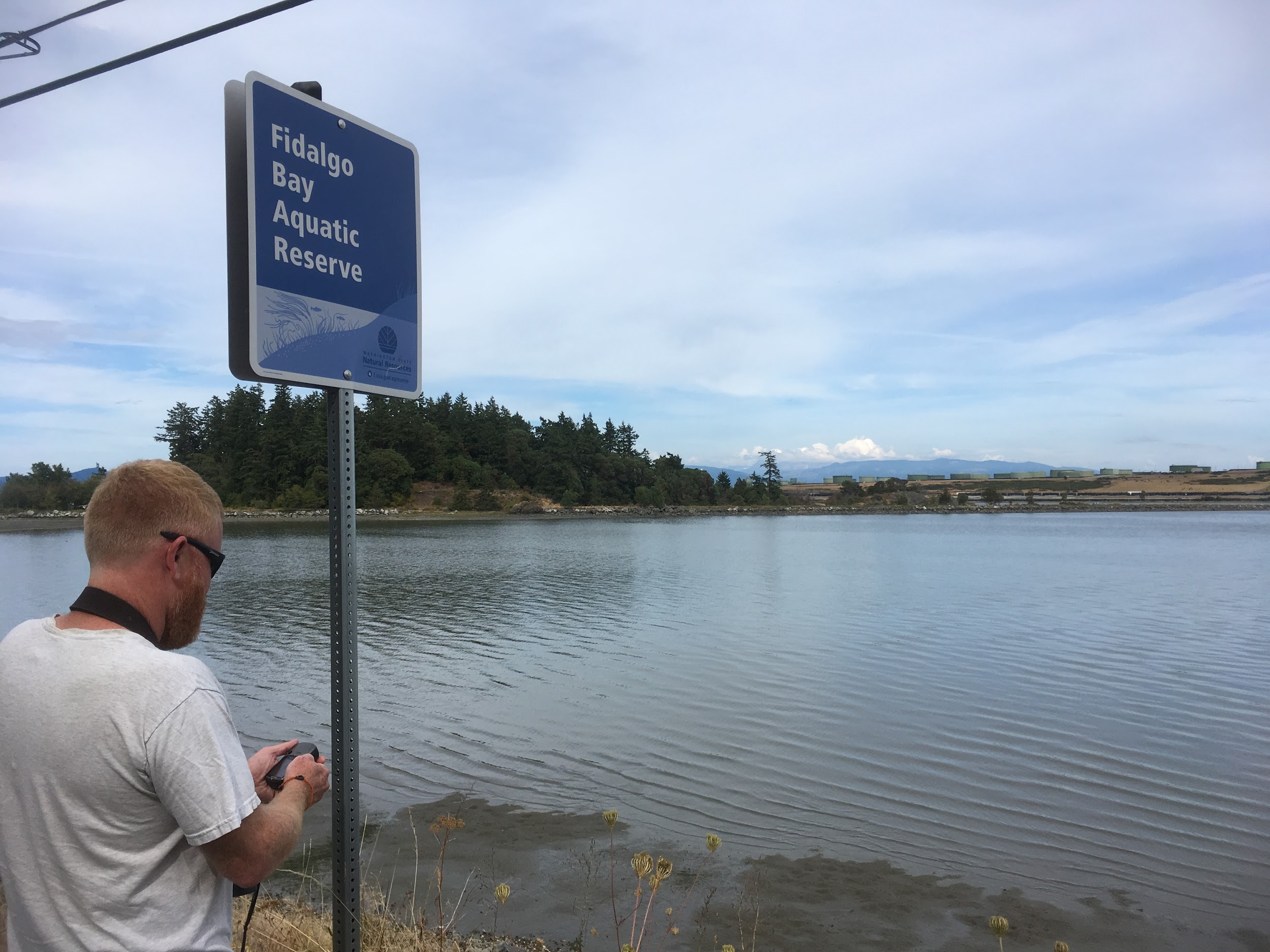 We also had the privilege of receiving instruction with volunteer training and protocol development by Washington Fish and Wildlife seabird biologist, Caanan Cowles (pictured to the left). Caanan also happened to work for John Bower back in the early 2000s when he last conducted bird surveys in Fidalgo Bay, so he helped us determine the four site locations for our survey as well. The surveys run from September to May for the overwintering season, and this year’s survey was our pilot year to work out the details in the protocol as well as organize a solid group of citizen science volunteers. We held a training in February at the Fidalgo Bay RV Park that had 19 participants, and around 6 volunteers attend the surveys each month. 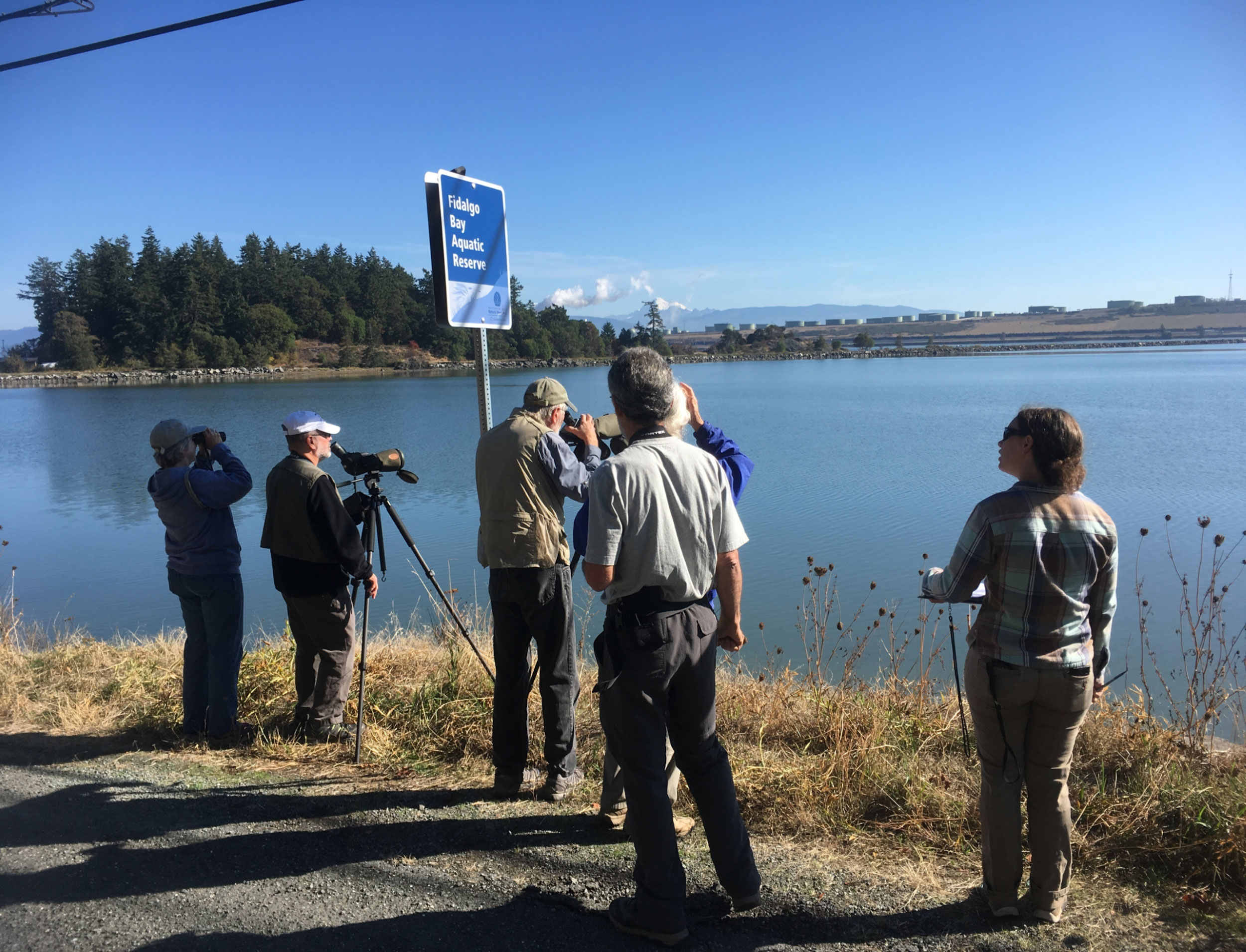 Birds are often used as an “indicator species” to detect the overall health of the ecosystem. Here in the Salish Sea, marine birds are predators, often dependent upon forage fish as their main food source. Fidalgo Bay Aquatic Reserve was created because it is a hotspot for forage fish spawning due to the expansive eelgrass beds, another common food source for migrating birds. Surveying marine birds gives us yet another element in the Fidalgo Bay food web to follow over time in order to detect any changes within the reserve.

By gathering data over a long period of time, we will be able to monitor trends in the population dynamics of the bird species that depend on Fidalgo Bay. This data will help us be prepared for detection of abnormal conditions and whether these changes are due to natural variation or anthropogenic causes such as an oil spill. Volunteer positions for the bird surveys include a spotter, counter, and a scribe. Although we do need an experienced birder for the counter position, all are welcome and encouraged to join our surveys and learn more about the birds of Fidalgo Bay Aquatic Reserve!

If you are interested in receiving updates for the 2018/2019 monitoring season with monthly surveys from September to May, please email Erica Bleke at This email address is being protected from spambots. You need JavaScript enabled to view it. 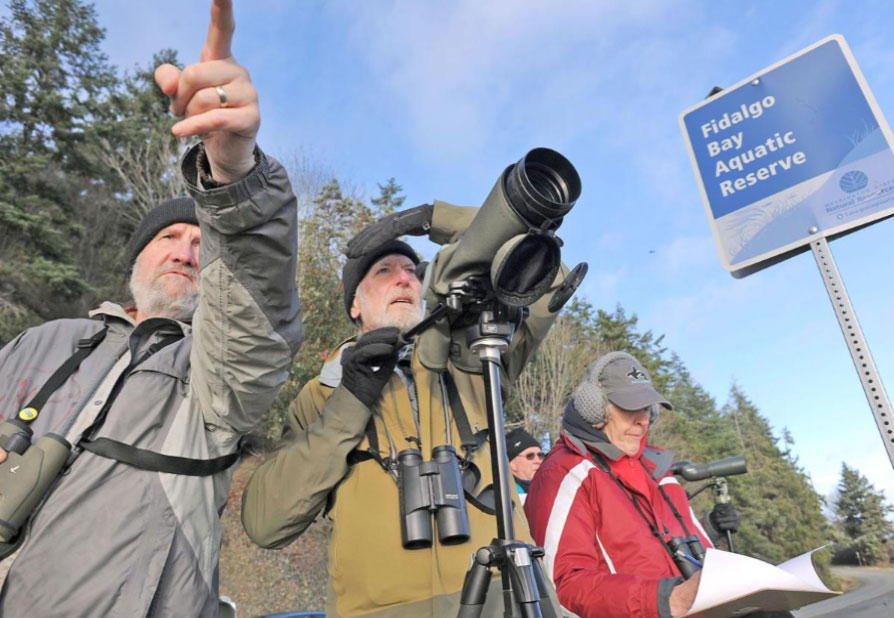 This past year I, as a member of the Puget SoundCorps (PSC) through Washington Conservation Corps/AmeriCorps and WA Department of Natural Resources Aquatic Reserves Program, have started a new, long-term monitoring project regarding marine debris. The PSC has adopted the protocols for the NOAA Marine Debris Monitoring and Assessment Program. This project serves as a basis for nationwide monitoring and assessment of marine debris. It seeks to answer questions such as how big is the marine debris problem, how is it changing over time, and which debris types are most common. 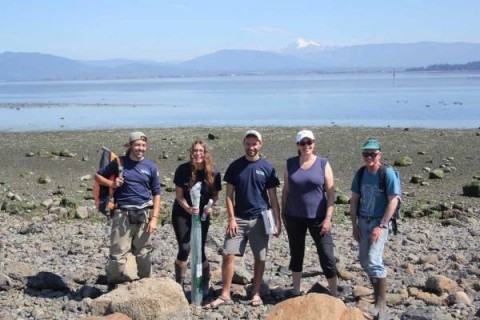 The data we will be collecting will help to determine types and concentration of debris present by material category, examine spatial distribution and variety of debris, and investigate temporal trends in debris types and concentrations.There are two study sites- an accumulation site in Fidalgo Bay and standing-stock site in Padilla Bay. Each site is 100 meters long and sampled monthly.

This project encourages volunteer involvement and we have had several volunteers come out and helped us to do these surveys, including Tom Flanagan and Rachel Best. The accumulation site seeks to identify debris material types and weight and their rate of deposition and flux onto the shoreline. The standing-stock site is a quick assessment of the total load of debris and is used to determine the density of debris present. Debris density reflects the long-term balance between debris inputs and removal and is important to understanding the overall impact of debris. All together this project aims to help in increasing our knowledge of the marine debris problem while working with community volunteers.

So far, we have completed 4 surveys since May 2017. We will be taking a month break from surveying while we transition from one PSC crew to the other but hope to start back up in October or November. Because so few surveys have been completed at this point and time, analyses of the data are not yet available. If interested in volunteering in future events, please e-mail Jamie Kilgo at This email address is being protected from spambots. You need JavaScript enabled to view it.. 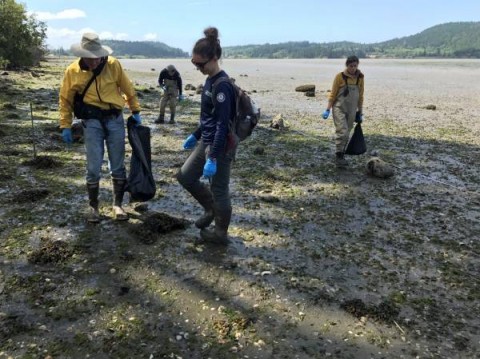 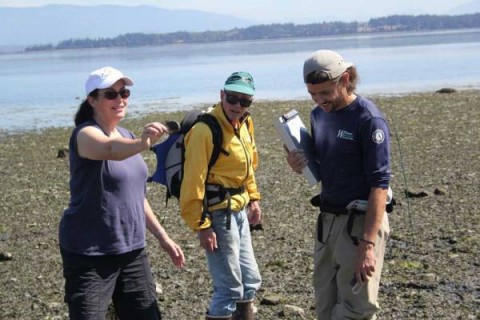