Are We Literally Washing Micro Plastics Into the Sea?

My daughter came home from her high school Environmental Science class last year talking about plastic fibers released when we wash our fleece. She said they are part of the ocean plastics problem, showing up in seafood we eat and even in our own bodies. Sounds like the plot from a bad horror movie. I have been in denial ever since. Give up straws? Sure, but give up my beloved fleece, a mainstay of life in the Pacific Northwest? Please, no not that. So when asked if I wanted to write a blog for our volunteers, I was ready to dive in and learn more about this topic. Without going too far down the internet rabbit hole, here is what I found out. 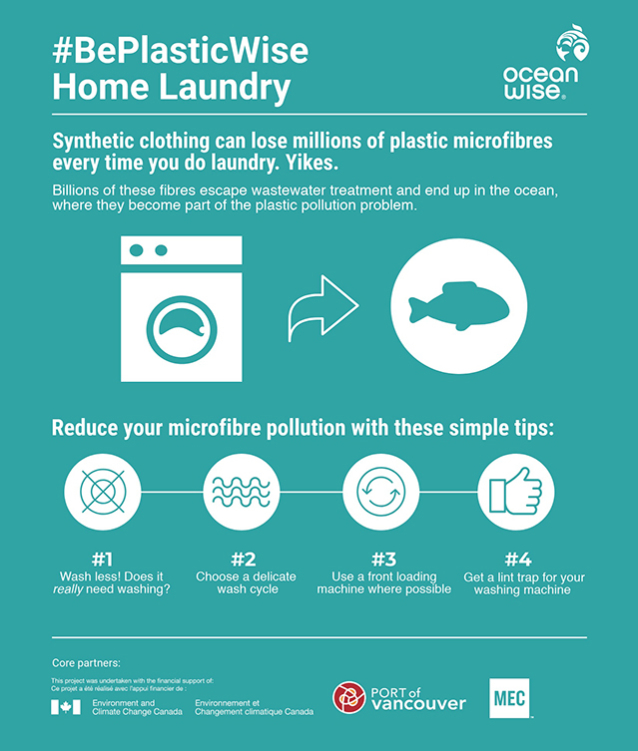 Ocean Wise’s Plastic Lab, a research arm of the Vancouver Aquarium, has been studying microplastics since 2014. Here are the highlights from studies they have conducted that were reported in a February 2019 Patagonia blog post.

A study of seawater from off the coast of British Columbia, Canada, found that over 70% of all plastic particles were fiber shaped. Other researchers studying the Atlantic Ocean report that fibers comprise 90% or more of the microplastic particles found. In such large numbers, and because these fibers are so small, they are a threat to marine life that mistake them for food.

In Spring 2018, Ocean Wise partnered with Patagonia, Arc’teryx, REI, MEC (Mountain Equipment Co-op), and Metro Vancouver to begin a multi-phase research program to investigate the sources of synthetic microfiber pollution, and to identify the best science-based solutions to the problem. 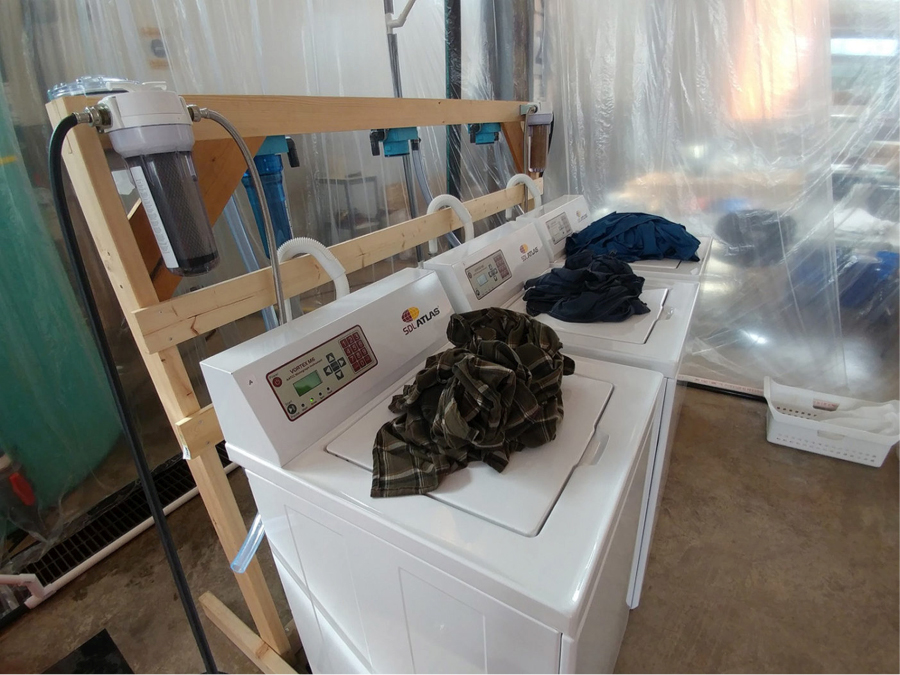 The study found that textiles shed between 31,000 and 3,500,000 fibers per load during normal laundering in household washing machines. Not all textiles shed equally. For example, ‘fluffy’ textiles like fleece, as well as textiles made of spun staple yarns and textiles pre-treated with brushing are the highest-shedding types. Some fabrics shed a large amount during the very first wash, and then shed little.

The laundry study was carried out with commercial-grade test washers that simulate a cycle in a typical home washing machine. Photo: Mathew Watkins 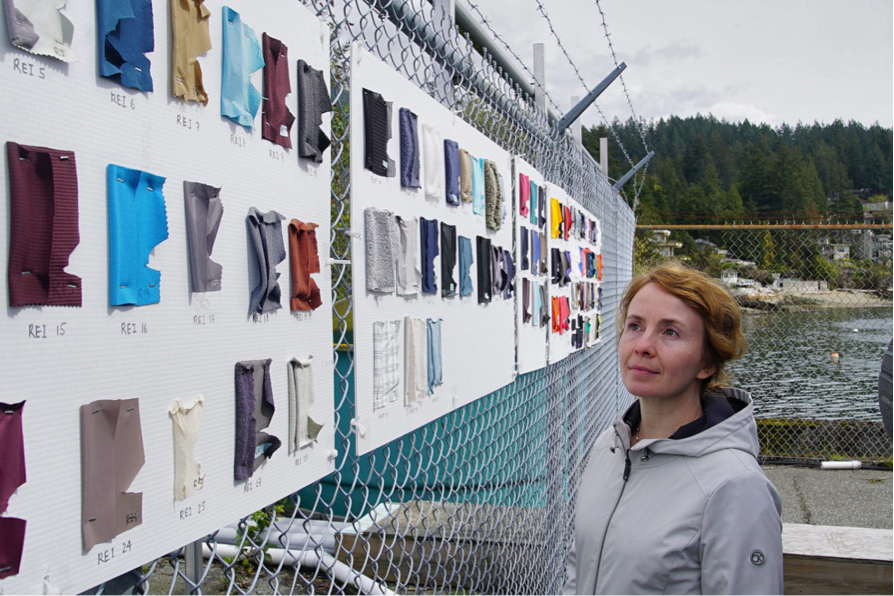 Data from the laundry study and the weathering study was used to create a reference library of spectra and a shedding catalog for the most common textiles used in outdoor apparel, a valuable resource that may help researchers to identify microscopic textile fibers and trace pollution back to its source.

The Ocean Wise researcher’s reported that the differences in shedding rates between textile types and over time provides opportunities for manufacturers to modify practices to reduce microfiber pollution.

A 2016 study reported in the journal Environmental Science & Pollution looked at the amount of fiber released when washing and drying new fleece blankets. They concluded “that cumulatively large quantities of microplastics are released into the environment from this source.” In addition, they reported the following results:

“Results confirm domestic washing of textiles and garments as a constant and widespread source of plastic microfiber emissions into the environment.” They found that the first washing released the most fibers by a factor of 2-3 times. After 7 washings the amount of the fiber release leveled off. “A key result of this study is the indication that fibers are emitted throughout the lifetime of the garment.”

“Release of fibers during tumble drying was approx. 3.5 times higher than during washing. However, dryers have built in filters.”

“These results show that installation and maintenance of a relatively simple and robust filter to washing machine wastewater could prevent most of the emissions.”

“Previous studies have shown that the majority of fibers released during washing are removed in wastewater treatment plants where these are used. “

The final study I am sharing results from, Rochman et al, investigated the presence of microplastics and fibers in fish and shellfish sold for human consumption in Indonesia and California.

For the California samples, “of all species purchased, anthropogenic {human caused} debris was present in the gut content of eight (67%) of all fish species sampled, including jacksmelt, Pacific anchovy, yellowtail rockfish, striped bass, Chinook salmon, blue rockfish, Pacific sanddab and lingcod and in the Pacific oyster. Within each species, we found anthropogenic debris in 29% of jacksmelt, 30% of Pacific anchovies, 33% of yellowtail rockfish, 43% of striped bass, 25% of Chinook salmon, 20% of blue rockfish, 60% of Pacific sanddabs, 9% of lingcod and 33% of Pacific oysters.”

The authors suggest this is due to differences in waste treatment practices. In Indonesia, large of amounts of waste is dumped directly into the sea and presumably includes a large portion of plastics. In California, “there are more than 200 wastewater treatment plants discharging billions of liters of treated final effluent just off shore." ”Even though treatment results in a reduction of many contaminants, synthetic fibers from washing machines can remain in sewage effluent, and may be delivered to aquatic habitats in large concentrations via wastewater outfalls. One study found one fiber per L of wastewater effluent.”

Take Away
One component of microplastic waste in the environment are fibers from our synthetic clothing. They are not captured completely by wastewater treatment plants and they have been found in fish and shellfish. What level of threat the fibers pose to the sea life that ingests them and the humans that in turn ingests the seafood has not been fully determined. The fibers pose both a potential physical hazard in the digestive system as well as being a source of hazardous chemicals that have an affinity for attaching to the surface of plastics.What We Can DoTo reduce the amount of plastic fibers released by your washing process Oceanwise recommends that you:

Teaming up to get to the bottom of microfiber pollution. Stephen Chastain.  1 Feb 2019. https://www.patagonia.com/blog/2019/06/what-were-doing-about-our-plastic-problem/Your fleece jacket pollutes the ocean: here’s the possible fix. Catherine O'Connor. Outside. 25 May 2017. https://www.outsideonline.com/category/clothing-apparel

Are we eating our fleece jackets?: microfibers are migrating into field and food. Jessica Boddy. NPR. 6 February 2017. 1:21 PM ET. https://www.npr.org/sections/thesalt/161357412/food-for-thought

The Skagit Plastic Reduction and Recycling Coalition is a partnership between Friends of Skagit Beaches and Skagit County Solid Waste. We are working to educate Skagit County residents on the issues of plastic waste in the environment and involve them in taking action to avoid single-use plastics and recycle plastic right.

The Problem with Plastics 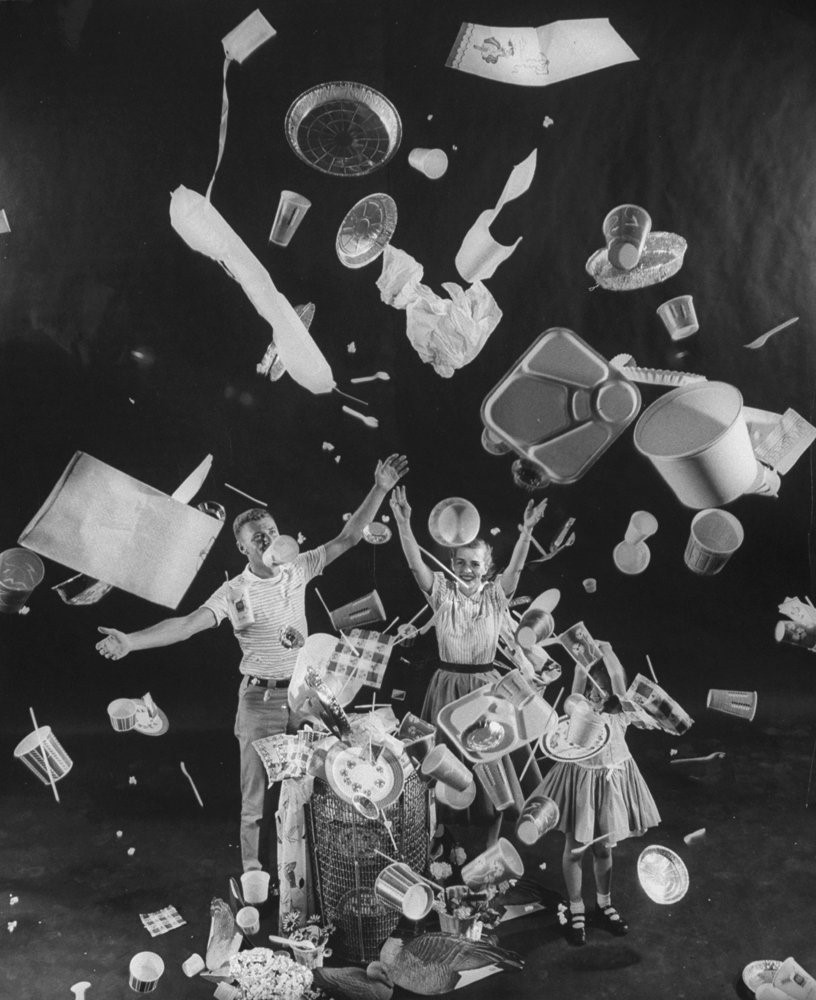 Its kind of a love/hate relationship we have with plastics

Plastic is an amazing thing. Invented in 1907 and perfected during the first half of the 20th century, plastic hit the market in full force in the post WWII era. The photo above from a 1950s Life Magazine article touted the advent of “Throw-Away” living and promised how it would free us from the burden of household chores. Plastic is durable, cheap, stain resistant, and light. We use it in so many ways, from airplanes to eyeglasses. Its durability is one of plastic’s attractions, but it also causes some serious problems related to disposal. That “Throw-Away” lifestyle has come at a significant cost to the environment and health.

By the Numbers. It is said that every piece of plastic ever made still exists on the planet today. An estimated 6,300 million metric tonnes, or 90.5% of all plastic waste ever manufactured, has never been recycled. Americans only recycle about 9% of the plastics used. Whereas in Europe, the plastic recycling rate is 30%. This unrecycled plastic has ended up in landfills, incinerators, or floating free and polluting the environment. All that plastic will last long after its useful life has ended. It takes 450 years for a plastic bottle to decompose in a landfill.

More numbers, because we love them. And it takes a lot of energy to make all the plastic we use. In the US plastic manufacturing consumes 12 million barrels of oil each year in the production of 30 billion plastic bags. Between 8-10% of the nation’s oil supply is used during the manufacturing process of plastics and it is predicted that plastics production will consume 20% of the world’s oil production by the year 2050. Nearly half of the 400 million tons of plastic produced worldwide each year is destined for single use items (e.g., straws, cups, bottles, bags) that have an average useful life of only 10-15 minutes before they become part of the waste stream. For example, single use plastic bags like those from the grocery store are only used for an average of 12 minutes! 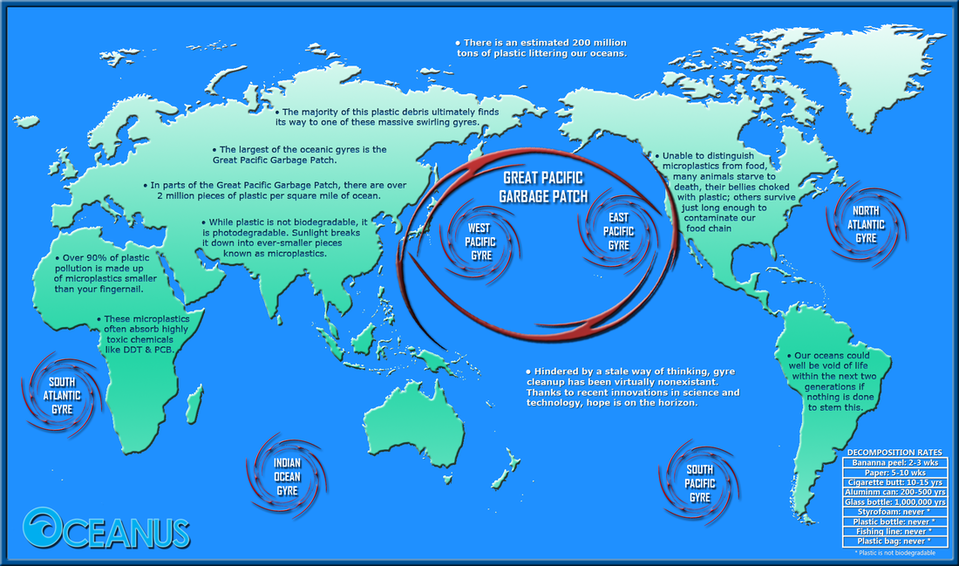 Animals get entangled in ocean plastics and they ingest it along with the toxics that adsorb to it. It has been estimated that each year plastic waste is killing one million seabirds, 100,000 marine mammals, large numbers of sea turtles and sharks, and countless fish. Nearly half of the world’s most important fish stocks for human consumption have been reported to contain plastic.

Microplastics, tiny fragments causing big problems. Microplastics are tiny fragments of plastic that are less than 5 mm in length. Some microplastics, like microbeads, are purposely manufactured while other microplastics are the result of the degradation of larger plastic debris. Ocean plastics eventually break down into microplastics, which have been found literally everywhere in the ocean where they have been looked for. On some beaches on the Big Island of Hawaii, as much as 15 percent of the sand is actually grains of microplastic. When consumed by marine organisms these microscopic pieces of plastic can cause physical damage and release toxins. Plastics have a natural affinity for toxicants and acts as a toxic conveyor belt, sponging up pollutants transferring it to everything that eats it. 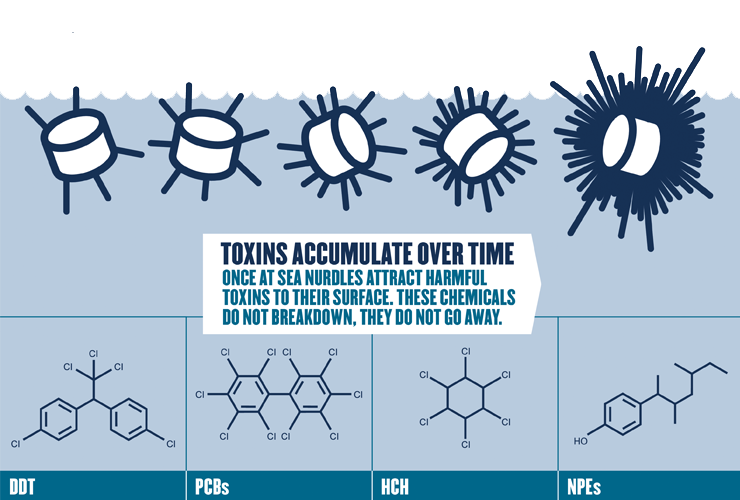 Plastics on our plates. Not only are marine organisms being directly impacted, humans may be impacted by consuming contaminated fish and shellfish. Research on the impacts of human consumption of microplastics through the food chain is growing but little is known about the impact on human health. Recent research conducted in the Salish Sea has shown that small plastics are widespread along shorelines and that filter feeding organisms like mussels, clams, and oysters are contaminated by plastics they have ingested from the surrounding waters.

What to do, what to do? Reduce your use of plastics, especially single use plastics! Adopt some “simple swaps” to reduce single use plastics in your life. Carry your own water bottle instead of using single-use plastic water bottles. Bring reusable shopping bags instead of using plastic grocery bags. Bring your own cutlery when you are eating away from home instead of relying on plastic cutlery. Use your reusable coffee cup instead of buying a single use cup. These simple habits can have a big impact when included in our daily routine. Plastics are all around us in our daily lives, so it can seem like a daunting task to reduce plastics in our lives. Just think of it as a journey to transition away from a “Throw Away” lifestyle to one that is better for our environment and health.

Guess What’s Showing Up In Our Shellfish? One Word: Plastics
https://www.npr.org/sections/thesalt/2017/09/19/551261222/guess-whats-showing-up-in-our-shellfish-one-word-plastics

The Impact of Microplastics on Food Safety: the Case of Fishery and Aquaculture Products
http://www.fao.org/in-action/globefish/fishery-information/resource-detail/en/c/1046435/

Microplastics in Fisheries and Aquaculture
http://www.fao.org/3/a-i7677e.pdf

1bag at a time
https://1bagatatime.com/learn/plastic-bags-petroleum/

The Skagit Plastic Reduction and Recycling Coalition is a partnership between Friends of Skagit Beaches, Skagit County Solid Waste, and the Washington Department of Ecology. We are working to educate Skagit County residents on the issues of plastic waste in the environment and involve them in taking action to avoid single-use plastics and recycle plastic right.

The Friends of Skagit Beaches Plastics Project is funded by a grant from the Washington Department of Ecology with additional support from Skagit County Solid Waste Division.