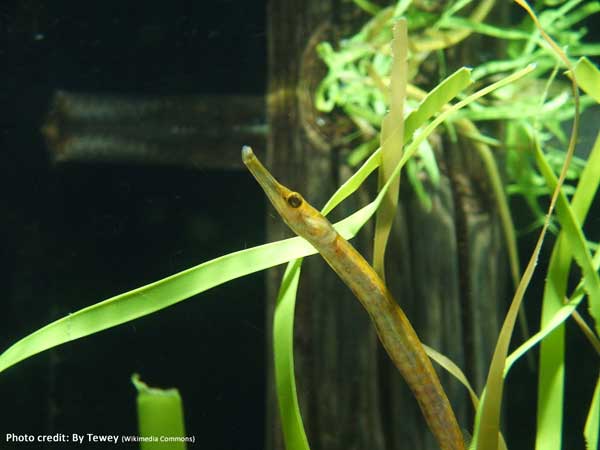 Picture a straightened and very slender version of a seahorse floating upright in the water, and you'll have the Pipefish. The same bright green as eelgrass, this unusual fish has a pencil-slim body and can grow to 13 inches long. Pipefish live among the eelgrass where their color and upright posture give great camouflage as they imitate the swaying grass. Pipefish can even change color from green to brown to match the closest vegetation.

Their few fins are very small so Pipefish are slow swimmers. They stay vertical as they move, beating their fins rapidly and steering by moving their heads from side to side. Instead of scales this flexible fish has bonelike rings encircling its body.

The Pipefish's mouth has no teeth and is at the end of a tube-shaped snout. The fish eats by vacuuming in small shrimp and other tiny animals from some distance away.

Like its relative the seahorse, male Pipefish carry the young. The female courts the male. If successful in attracting him, she twists herself around him and deposits up to 900 eggs in the brood pouch on the underside of his body. A protective tissue forms over the pouch's opening and keeps the eggs safe inside. The male carries the developing young for several weeks before they emerge as swimming juveniles less than an inch long.

The greatest threat to Pipefish is the loss of eelgrass. Please help protect this valuable habitat which is so important for pipefish and many other marine animals. Follow the regulations established to protect eelgrass.