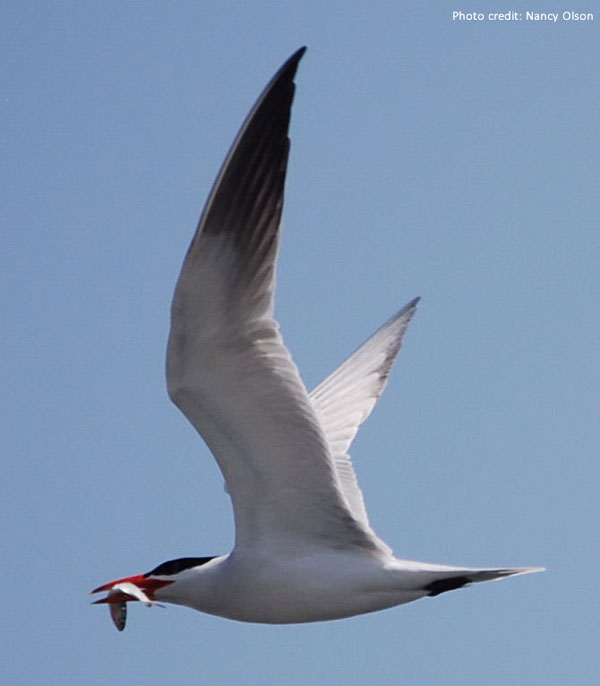 The Caspian Tern is a seabird you can spot around Puget Sound from spring to fall. Of the world's 44 species of terns, this is the largest. Gray and white, with a black cap, big dark red bill, and four-foot wingspan, the Caspian Tern looks like a gull but has more sharply pointed wings and a habit of plunging into the water.

When Caspian Terns come back from wintering along the Mexican and Guatemalan coasts, look for them flying big circles over Puget Sound's bays. They stay high above the water, looking down as they fly. When the tern spots a fish, it suddenly plunges straight into the water, disappears for a moment, then leaps back into flight with the little fish clamped in its bill.

Why the name "Caspian?" This bird was first described for science around the Caspian Sea in Asia during the eighteenth century. It has one of the widest distributions of any bird in the world. Caspian Terns are along the coasts, and sometimes inland, on every continent except Antarctica.

In many places the Caspian Tern has become rare, but it's easy to find in Washington State. In fact, the world's largest nesting colony is at the Columbia River's mouth. Islands formed from dredging the river provide perfect Caspian Tern nesting habitat, and young salmon and steelhead descending the river are perfect tern food. Controversy over whose fish these are — birds or people — led to law suits and a complicated settlement. Still, it's always a welcome sign of spring when the Caspian Terns come back to Puget Sound and add to the varied life along the beach.