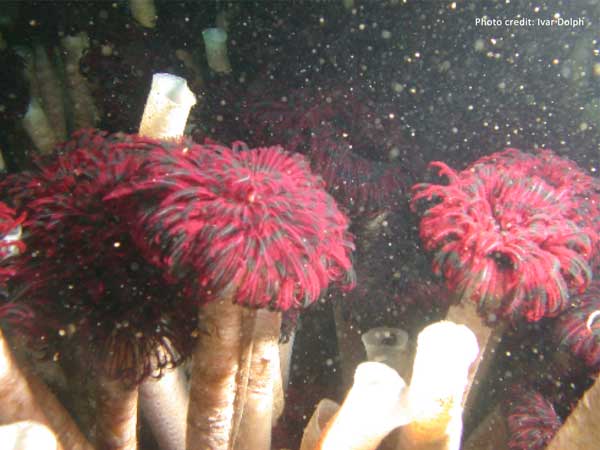 You can see the colorful plumes of the Feather Duster Worm in tidepools and on dock pilings. Puget Sound is home to many types of worms with a huge variety of life styles.

This particular one, the Feather Duster, lives in a dull white, leathery tube it makes and anchors tightly to pilings or rocks. These tubes are often in clusters that can be big enough to resemble shrubs. Other animals make their homes inside the clusters.

Feather duster tubes are tough and can withstand the impact of heavy waves, but these worms live in calm water too. At quiet times and when no predator is near, each worm extends feathery tentacles out the upper end of its tube, making it look like the feather dusters people used for housecleaning. These colorful tentacles, often banded green and maroon, catch passing bits of food from the water and take in oxygen too.

The tentacles are equipped with tiny spots very sensitive to changes in light. Watching a Feather Duster Worm in a tide pool, cast a shadow on it with your hand and in the blink of an eye, the worm will pull its tentacles down into that tough, leathery tube. You might be a predator! Wait a little while, and the tentacles will reappear as the worm goes back to feeding.

Feather Duster Worms are just one example of how well marine creatures are adapted to the challenging environment in which they live. When watching them and other tidepool animals, avoid putting your hands or feet into the pool so you don't disturb them. Sit at the edge and enjoy observing these miniature worlds.