...On Cap Sante and Fidalgo Island

Fidalgo Island originated beneath the ocean as layers of the earth’s crust. Moving ocean plates transported the crust, thrust it against the continent, and eventually uplifted and eroded it. Such slices of uplifted oceanic crust—found at the edges of many continents—are called ophiolites. The Fidalgo ophiolite’s bottommost layers are exposed on the island’s west side, in Washington Park. Over time, rock layers were deposited on this base by volcanic activity and ocean sediments. Subsequently, glaciers left their own marks.

Fidalgo Island geology is dominated by an ophiolite formation—a piece of earth’s layered crust and mantle that was uplifted, tilted, and is now part of the Washington coastline, as shown in the cross-section.

Serpentinite, a greenish-black rock, was once the bottommost layer of the oceanic crust.

The earth’s continental and oceanic plates are in constant motion, able to carry rocks great distances. Tiny fossils found in Fidalgo rock—like this radiolarian—are known to have originated deep in the ocean near the equator more than 150 million years ago. The fossil’s presence on Fidalgo provides evidence of the origin and age of local ophiolite rocks. 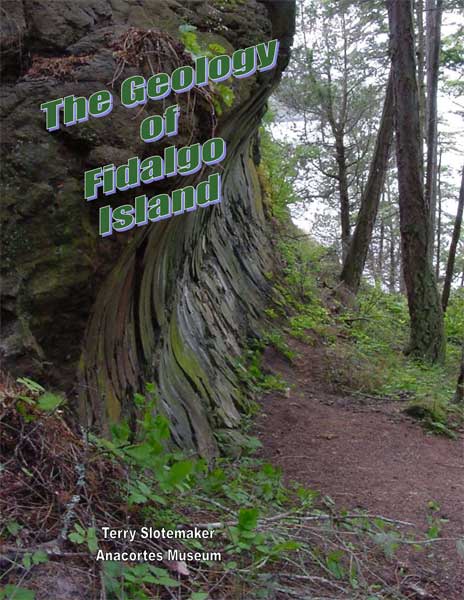 On Washington Park’s Burrows Channel trail, a dramatic striated groove—65 feet long and 10 feet high—was carved in a low cliff wall by a boulder carried by the glacier.

The last ice age ended about 12,000 years ago, long after the Fidalgo uplift. The mile-deep continental glacier reached from northern British Columbia south to Olympia, Washington. Its movement sculpted much of the western Washington and Fidalgo terrain. Moving over the landscape like a conveyor belt, it deposited rocks and soil in some areas and eroded others.